Our annual art show is online in 2020. Please see our amazing entries below. The People's Choice Award voting link can be found at the bottom of the page. Entries close 5pm Thursday 22nd October.

I am triggered by the word resilience. The blue lapels represent the ranks within my former workplace. The quote in a speech bubble comes from the top rank, this was his response when asked how to tackle the rise of PTSD amongst workers. It shows a lack of understanding for mental health injuries and implies that those who become injured were weak and lacked resilience, thus placing blame back on the injured person. I am represented by the clear lapels as I held no official rank within the workplace, to them I was invisible, dispensable, just a number. There are four layers of the clear lapel representing the years so far battling PTSD, the white print behind the lapels summarise how this quote affected me mentally and triggers me. 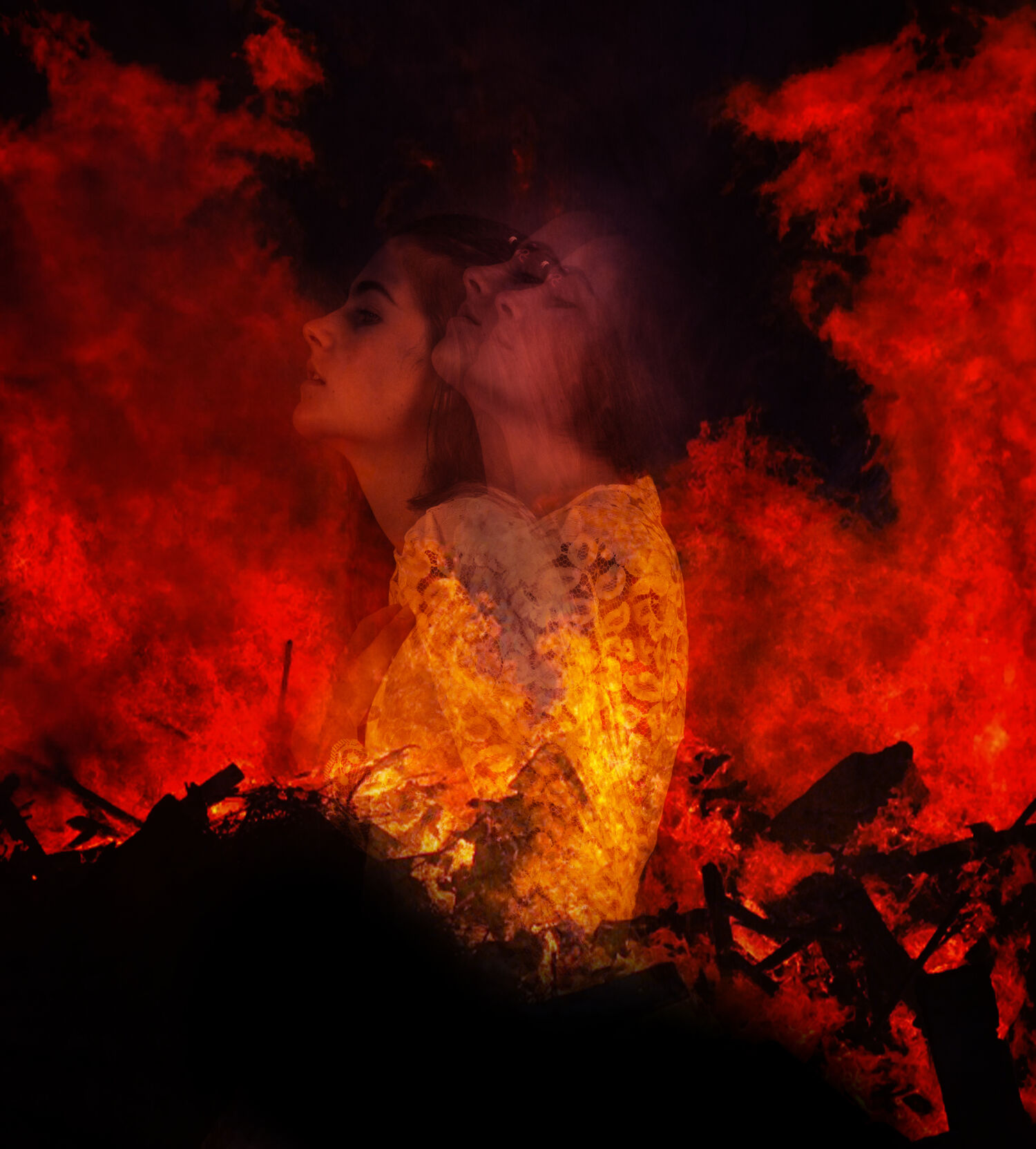 2. Resurrection from Ruin by Jen Griffith

To me this piece shows a girl coming out of the ashes, the battle, a warrior. She overcame her inner demons and all the forces against her and was triumphant. I just see resilience in her. 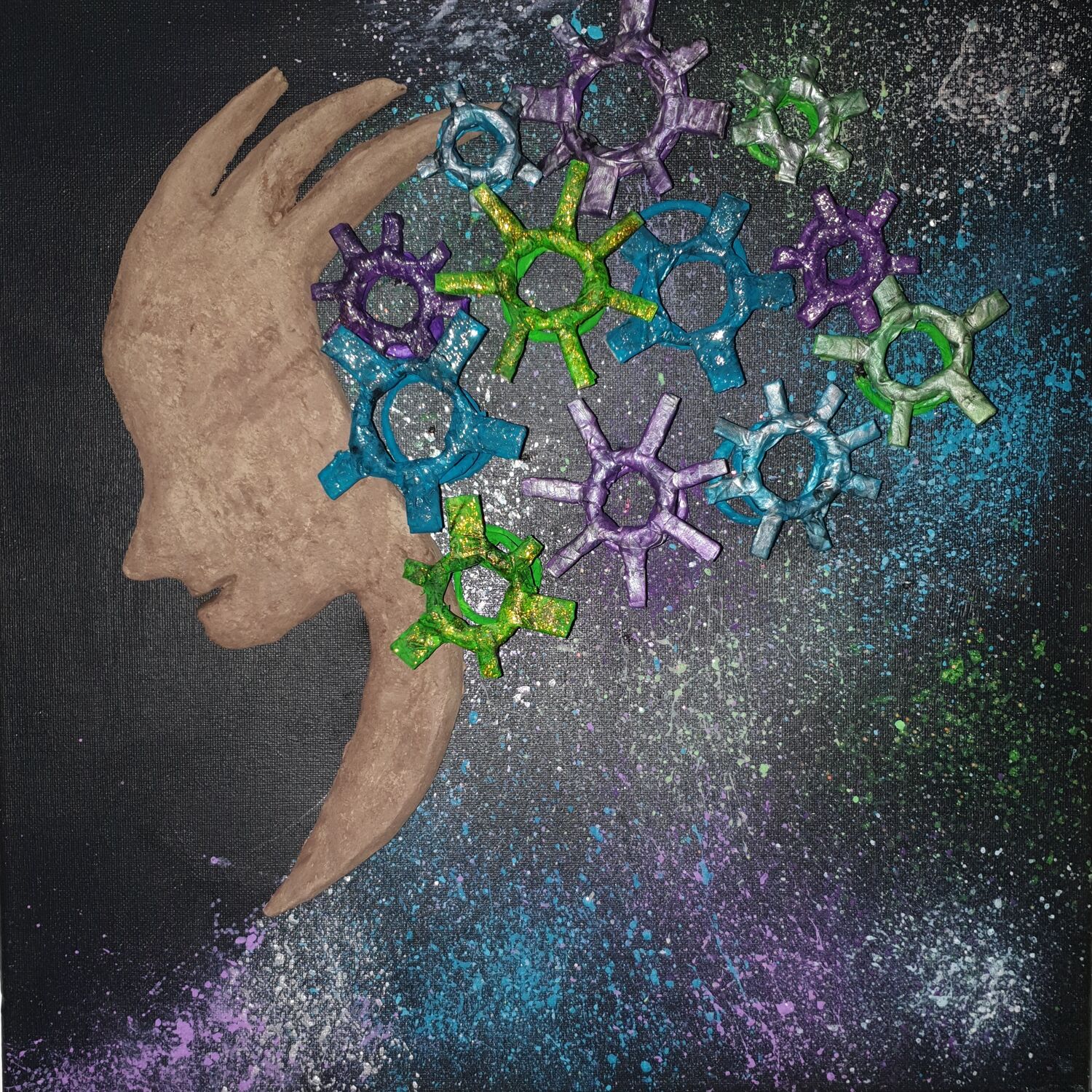 3. Toughness and Elasticity by Kristie Jones

I looked up the meaning of Resilience in the dictionary for inspiration. It appears that there are 2 main meanings for resilience, tough and elasticity. The toughness is represented by the hard, stone like head of someone displaying mental resilience. The elasticity is represented by the bounce back of the springs. These are attached to the ever turning and inter locked cogs of the mind. 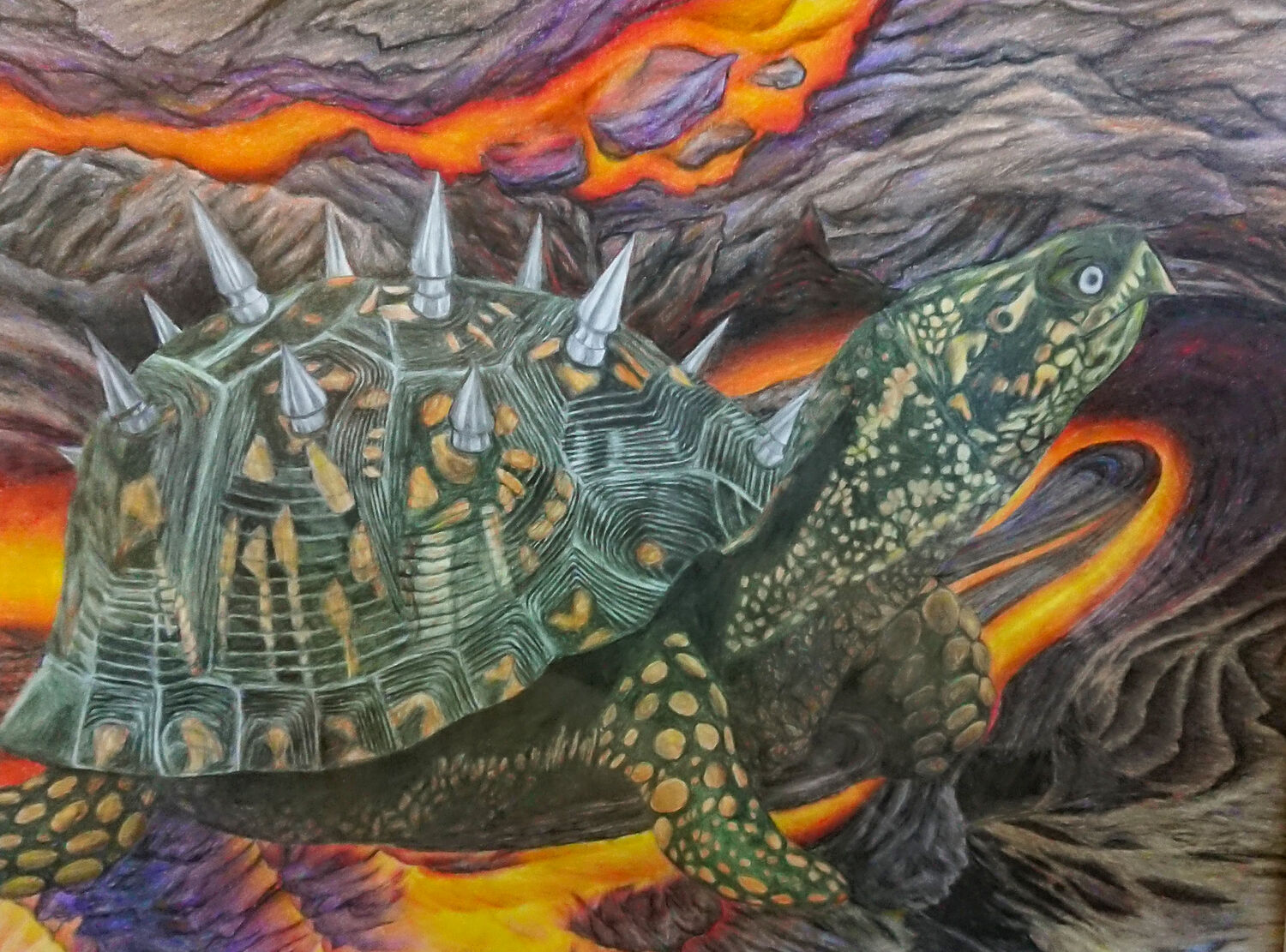 One of the earliest moments of my resilient nature as a child was from my Year One teacher who spoke to my mother about how gritty I was at age 6 when my parents were separating. She inspires me most in my role as a teacher today, because of her I want my students to know that I notice these qualities in them and that they matter more than their test scores or what’s happening at home. This turtle represents me during times of real struggle since then, when life has thrown things at me that I never expected to experience. Remembering my teacher saying that I was gritty is something that I return to when I need to take that time for reflection and make hard life choices. It is what drove me to not give up when the messy stuff hit the fan. By crawling through lava this turtle has grown a thick skin, and metal spikes that show the internal determination she has to get through the short-term burn of the lava for a long-term goal, choosing resilience over suffering. This is not to suggest that crawling through lava is a good idea, however, the evolution of this turtle means that perhaps we all can do this when we least expect to. 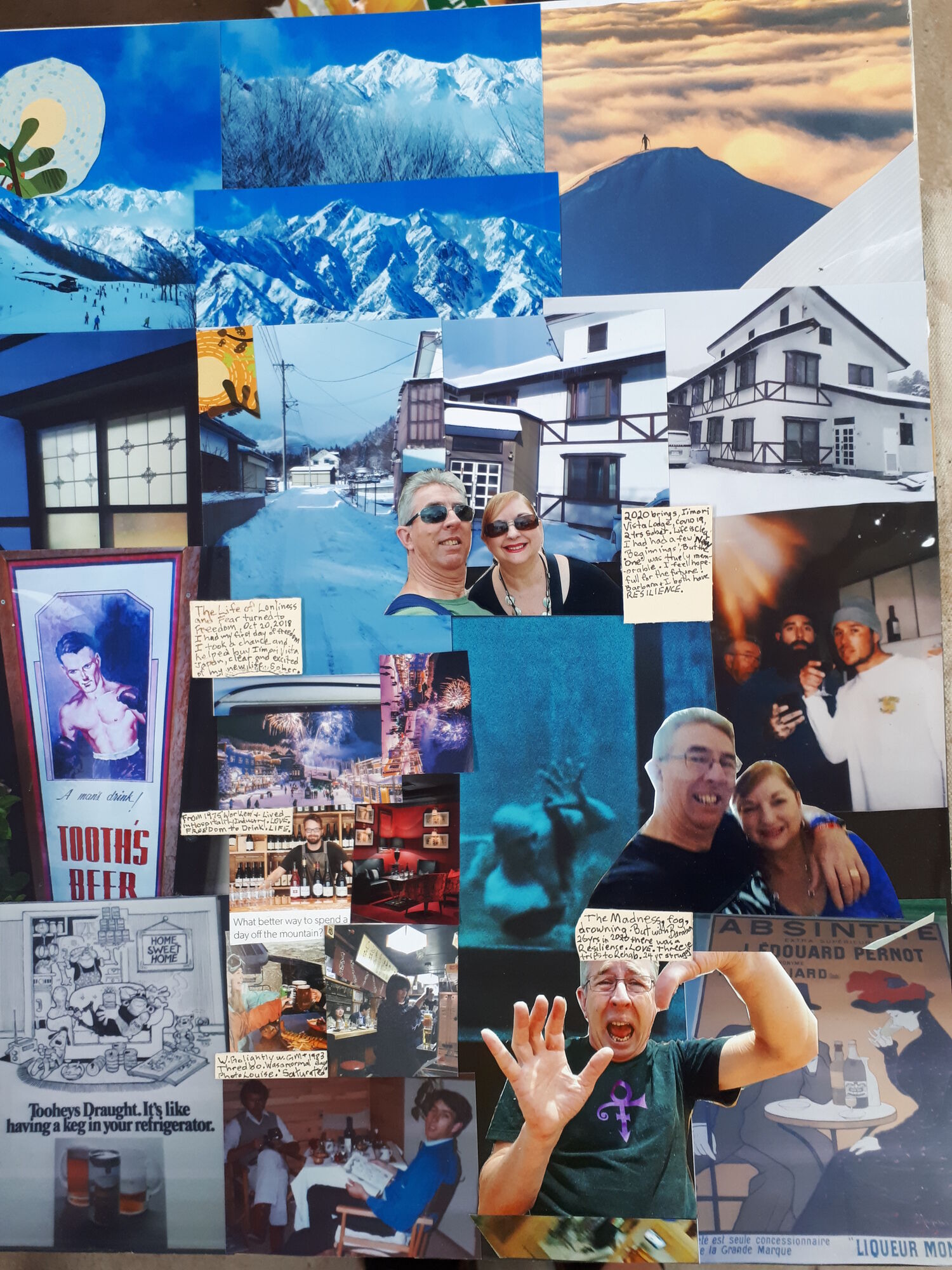 I grew up in the alcohol business and loved every minute, until I didn’t. I fought for 24 years until I was resilient enough and had the reason to stop. Barbra was resilient too, being with me for 26 years and we are all enjoying the benefits. A lodge in Hakuba, Japan and a new life with my son in a business venture. 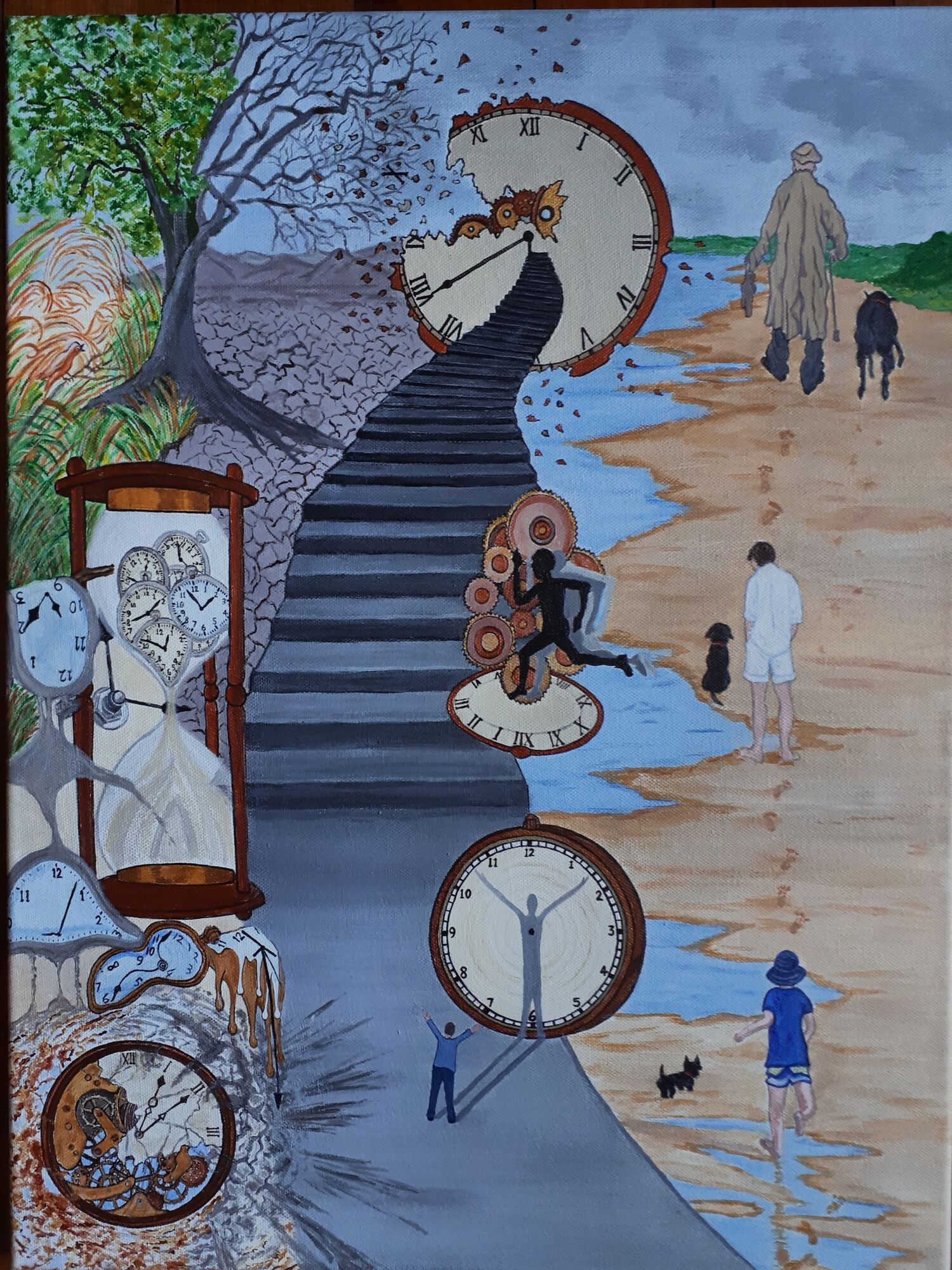 6. Passage of Time by Anita Morris

Difficult roads often lead to beautiful destinations. The path of least resistance will often take you farther from your destination than the seemingly more difficult one, but an easy trek in the wrong direction is ultimately far more exhausting & devastating than an uphill climb to euphoria. You can't go back & change the beginning, but you can start where you are & change the ending. 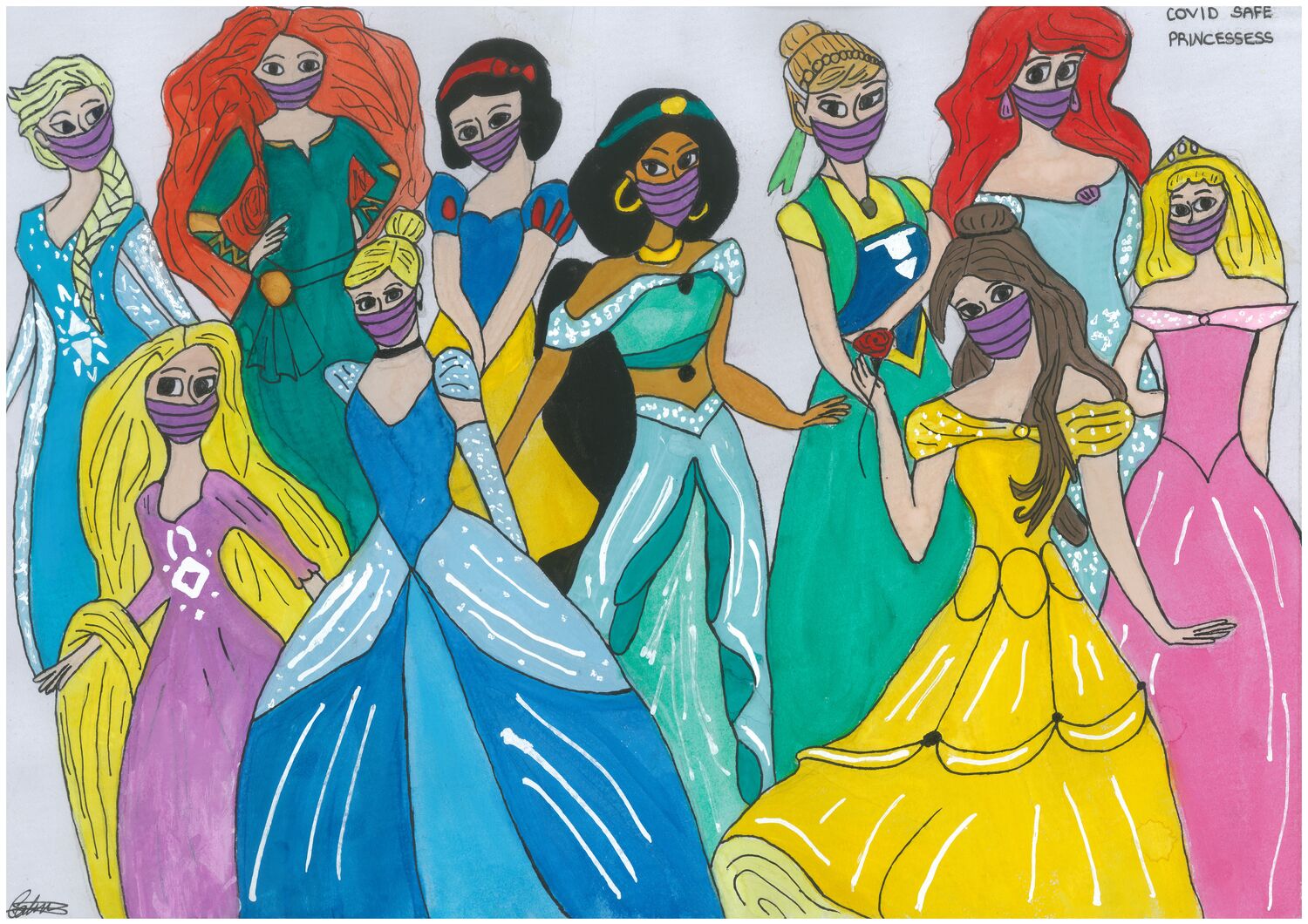 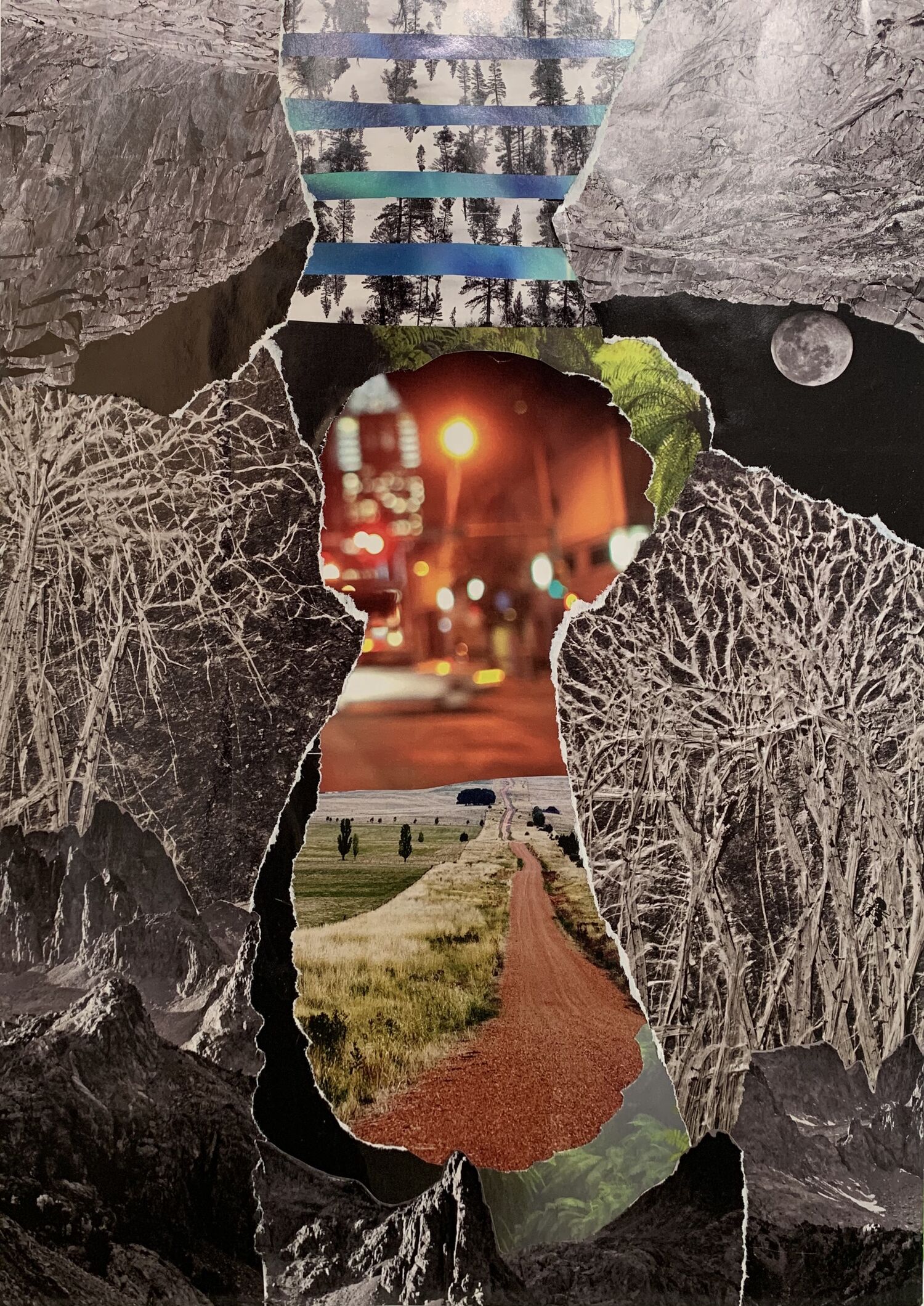 8. Tearing Through the Bleak by Natalie Heymans

Resilience is persevering and tearing through the bleakness to find your path back to the world. 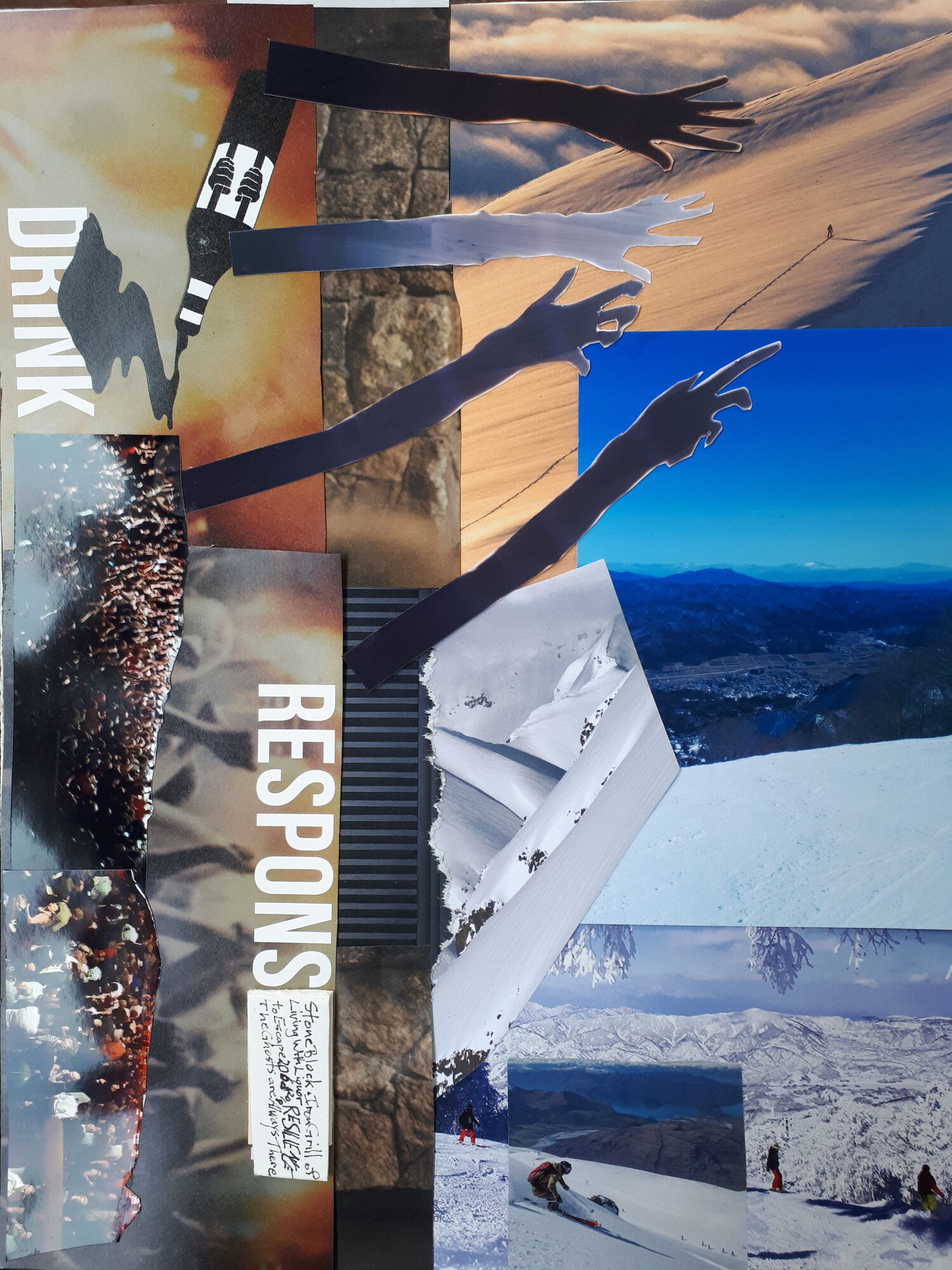 There is a void between chaos and where I want to be, but the fingers still grab and try to reach out. Resilience to steer away from the crowd and ski my own run. 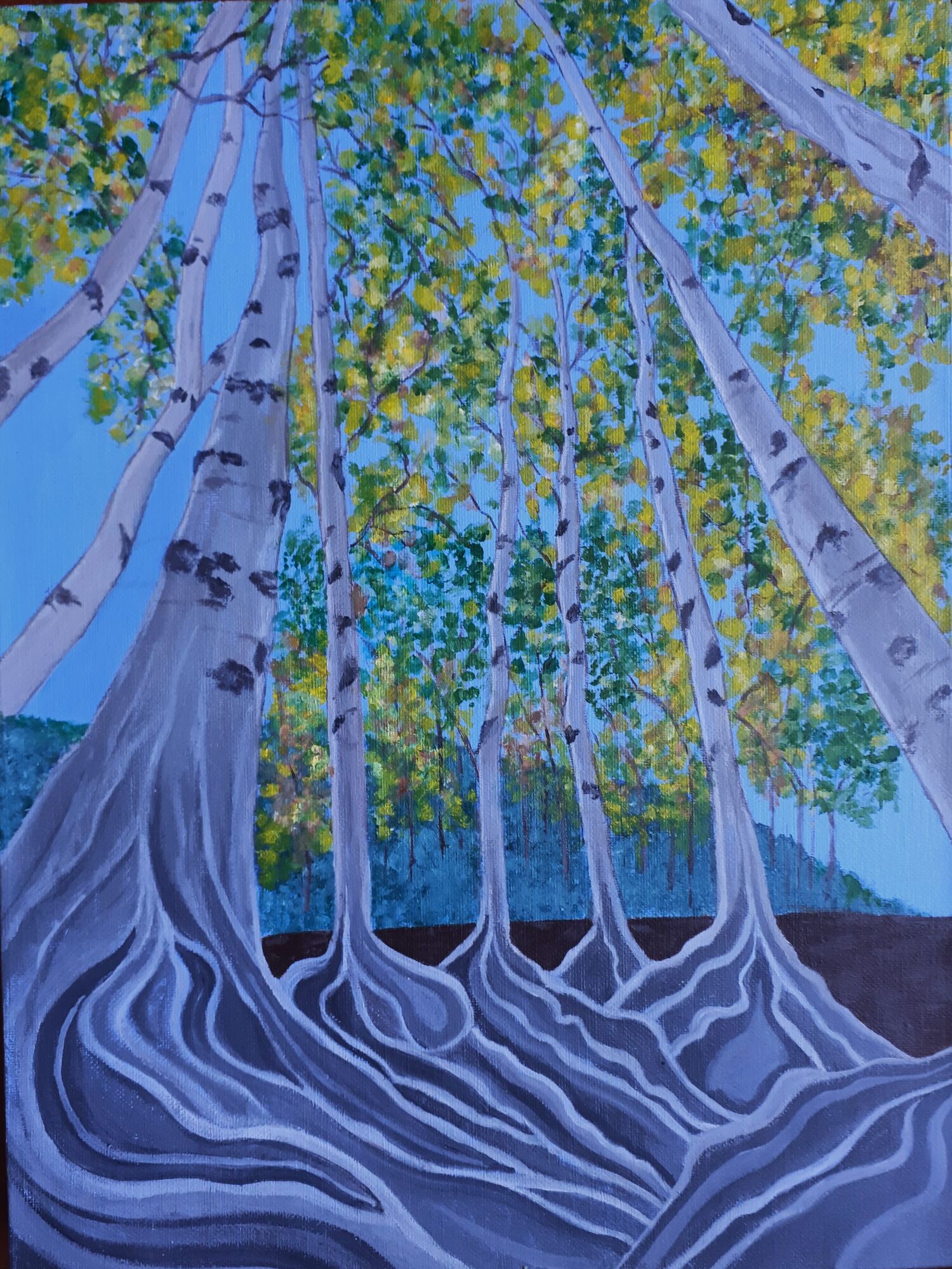 If you feel like you are losing everything, remember that trees lose their leaves every year and they still stand tall and wait for better days to come. Stand up straight and realise who you are, that you tower over your circumstances. 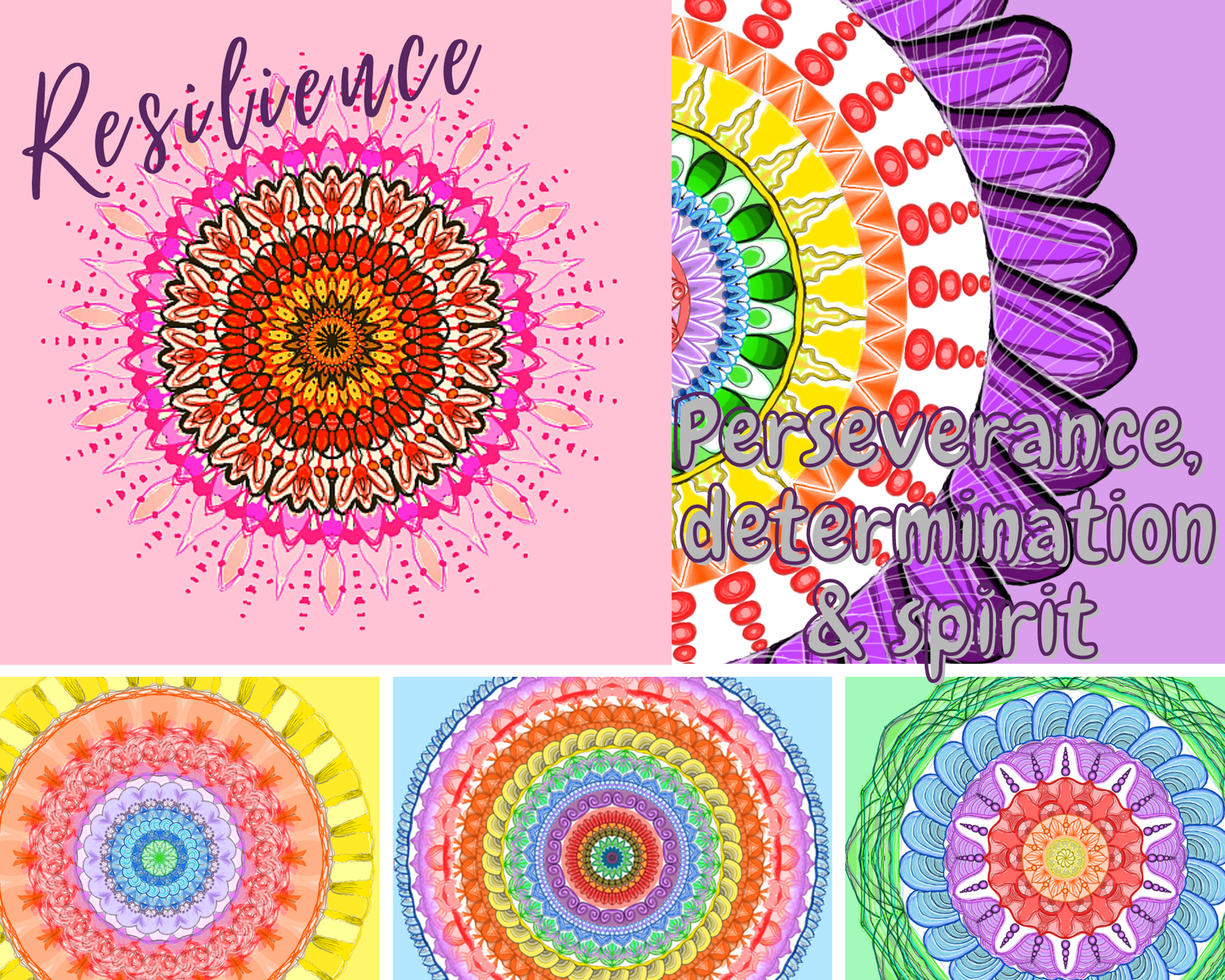 When experimenting with different methods of digital art, along with making mistakes & corrections, Resilience was the key to completing the art work. Perseverance has come from the teachings of my late father who taught me to see things through to completion. Determination has come from Dr Dharma who encouraged me to explore and persist with my art works. Spirit has come from the Zen intended to be achieved by the creators of the origin of mandalas. 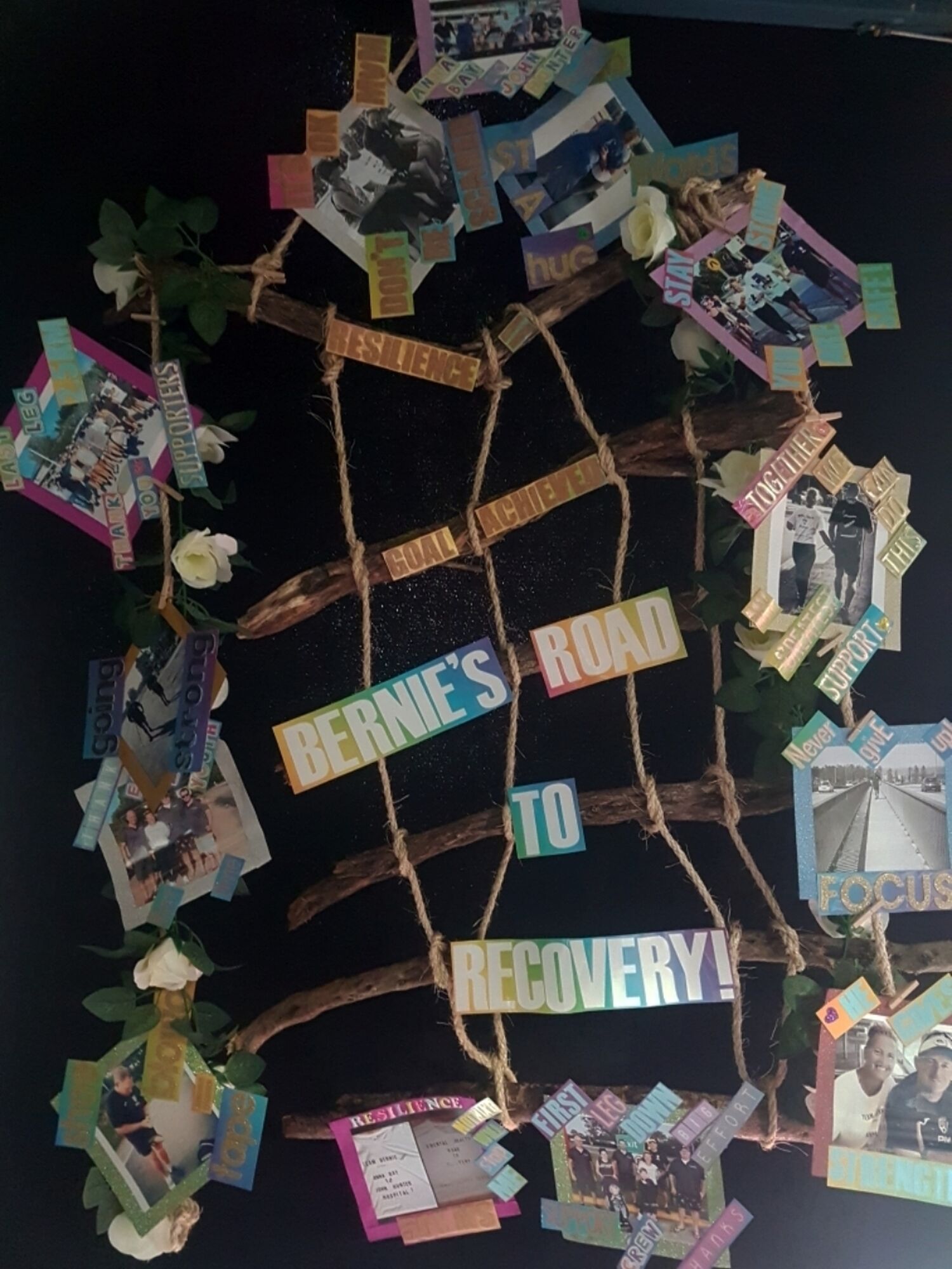 Please take a moment to vote for your favourite piece through the short survey below. The winner of the People's Choice Award will receive a $300 cash prize. Please note: Only one vote per person will be valid.